What is an activist? 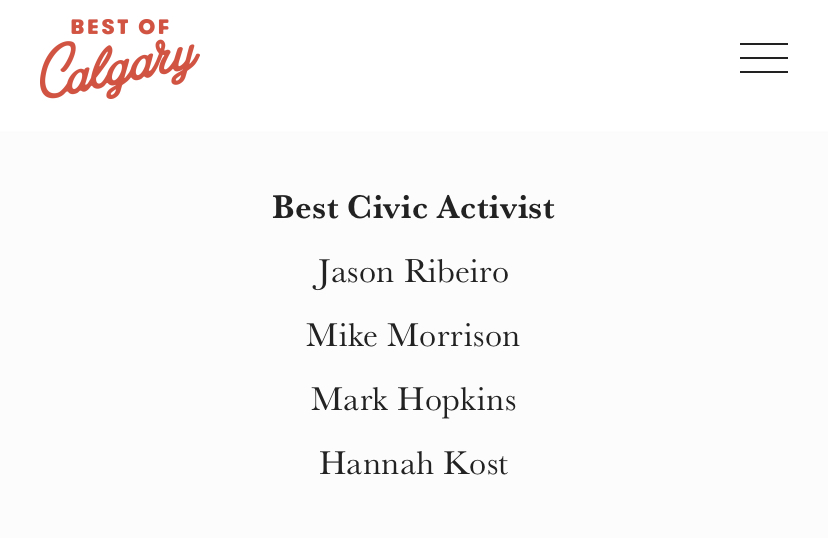 I recently learned that I’ve been nominated as a finalist for “Best Civic Activist” in the 2020 Best of Calgary survey. This provoked a lot of mixed thoughts and feelings, foremost among them:

I have a history with Best of Calgary.

The survey used to be hosted by FFWD Weekly. It was simultaneously a popularity contest / in-joke for FFWD readers; a badge of honour for the winners (or of shame for the “Worst Of” recipients); and one of FFWD’s best-selling issues every year, helping to keep the free weekly alternative newspaper afloat.

I was in on the joke. In 2011, I got third place for “Hardest working Calgarian”, after Mayor Naheed Nenshi and Jarome Iginla of the Calgary Flames. To this day, I include that accolade in my bio. (The category vanished in the 2012 survey.)

After FFWD shut down in March 2015 (RIP), a group of Calgarians purchased the rights for Best of Calgary and re-launched it in 2016. The survey was still at its heart, but the new Best of Calgary also featured a symposium, an event series, an impressive list of sponsors and a vision to celebrate Calgary for all its greatness and all that it stands for. It was still a popularity contest – “best of” surveys pretty much always are – but suddenly it felt less like a joke.

Their first “Supposium” in 2016 turned into a whole thing, which I don’t need to recap here – this Huffington Post article, Best of Calgary’s response, and my response to their response offers a picture of what went down.

To Best of Calgary’s credit, they listened to the criticism. In the lead-up to their 2017 activities, they struck a Citizens’ Committee to help broaden their reach and improve future surveys / events. I sat on the committee for almost a year alongside a pretty badass group of humans, and I saw Best of Calgary take our suggestions to heart. I still have issues with the whole concept, but this post isn’t about Best of Calgary as an organization or movement; it’s about my nomination.

In 2018, Best of Calgary introduced “Best Civic Agitator” as a category. I was nominated, and took third place after Calgary Raging Grannies and Mike Morrison. I thought it was a bit weird, but, having recently “agitated” Best of Calgary itself, the nomination made a certain kind of sense.

Last year, the category changed to “Best Civic Activist”, and I was again nominated. This time, I was more disgruntled. Co-nominee Sharon Stevens and I both threw our support behind Michelle Robinson, who ended up placing third after Mike Morrison and the Raging Grannies.

And now, as voting opens for Best of Calgary 2020, I’m once again up for the title of Best Civic Activist. This year, more than ever, I’m uncomfortable, unsettled, frankly kind of pissed about the nomination… and as more and more messages of congratulations came in from respected and beloved friends and colleagues, I figured it was time to examine why I was so uneasy.

The experience I’m having now reminds me of my friend Grant Neufeld, who – back in the FFWD days – was named “Most Active Activist” several years in a row. In 2009, he expressed his discomfort with the accolade, calling for FFWD to change the category to “Most Dedicated Activist” with the following rationale:

I’ve always felt awkward about awards, and this one in particular. It’s a lot easier for me to be the “most active” than it is for most people engaged in activism. I have a tremendous bundle of privileges that give me more opportunities than most (male privilege, white privilege, economic security, etc., etc.…).

Looking back on the people who have been identified as “most active activist”, and runners-up, over the years FFWD has been running the survey, I’m pretty sure we’re all a bunch of non-impoverished, adult (but not “too old”), white males. This stands in stark contrast to what I see in the activism in this city.

… There are tons of people in this city who — in the face of challenges my privileges shield me from — are doing amazing work for positive social change. I think we would be better served by creating ways of recognizing their contributions.

A couple months back, I sent a request to FFWD to change the name of the “Most Active Activist” category to “Most Dedicated Activist”. I’m pleased to see that they have taken that advice — thank-you FFWD!

Eleven years later, with the survey no longer hosted by an alt-weekly newspaper, and with the category changed to “Best Civic Activist”, I think the concerns and criticisms levelled by Grant are even more pressing.

Part of my discomfort with the nomination is that I don’t call myself an activist. While I’m honoured and deeply appreciate that people nominated me as such, I’m much more comfortable with the title “advocate” or “involved citizen”. But that begs the question: what’s an activist?

A quick online scan for definitions offers a few possibilities. Merriam-Webster defines activist as “a person who uses or supports strong actions (such as public protests) in support of or opposition to one side of a controversial issue”. Cambridge: “a person who believes strongly in political or social change and takes part in activities such as public protests to try to make this happen”.

Some of the above could, arguably, apply to the work that I – and Swallow-a-Bicycle Theatre – do. But what comes closest to the heart of my discomfort is an article by Eva Lewis, “an eighteen-year-old advocate and activist”, published (bizarrely) by Adobe Corporate Communications, entitled “What’s the Difference Between an Advocate and an Activist? Have You Been Mislabeling?” In it, she proposes:

To be an activist is to act on behalf of solving social and political issues. It is to be at the forefront of a movement, often times compromising your own energy in order to seek justice and evoke change.

To be an advocate is to speak and learn about social and political issues. It is to bring attention to an injustice, subsequently aiding the activist in their fight against that same injustice. Although different, both are necessary in order to create systemic change. Without one, the other cannot function.

Yes! I’m not at the forefront of pretty much anything but – at my best – I learn and speak, advocate and aid.

If I had to be called an activist, a more accurate title for me than “Calgary’s Best Civic Activist” might be “Calgary’s Most Palatable Activist” – an activist with a post-secondary education and financial security, one who’s white, male, straight and cisgender, who’s able-bodied and neurotypical, who travels in respectable circles and speaks “articulately”, the kind of activist that won’t rock the boat too much.

With this post, my intention isn’t to cast aspersions on anyone who took the time to nominate folks to Best of Calgary, or on any of my co-nominees. I have a tonne of respect for Mike Morrison’s outspoken advocacy, particularly around LGBTQ2+ rights. I don’t know as much about what Hannah Kost and Jason Ribeiro have been up to, but both seem like pretty rad humans.

I can’t help, though, but think of the countless individuals and groups who didn’t make it onto the list. The organizers of Fridays for Future Calgary, or Extinction Rebellion Calgary. The folks behind Skipping Stone, Uproot YYC, the Society for the Advocacy of Safer Spaces, Bear Clan Patrol Calgary, Boring Little Girls Club, Femme Wave, Disability Action Hall, ARTICLE 11, the Calgary Immigrant Support Society, Alpha House, Soccer Without Boundaries, Cree8, Vibrant Communities Calgary or the Calgary Rainbow Railroad Station. What about the Mohkinstsis Healing Camp, which occupied the park outside of the Calgary Court of Appeal for most of 2018, and never landed a nomination?

And that’s just for starters. There are countless people and groups on the front lines of environmental justice, social justice, Indigenous resurgence and more. While “best” is a weird and competitive way to qualify someone’s activism, I’d say any of the folks listed above – and so many others that I don’t know – are much more deserving of the title than me.

With this post, I’m not calling for anything like a boycott of Best of Calgary. I appreciated fellow nominee Mike Morrison’s response to his 2020 nominations:

If you haven’t heard of some of the #BestOfCalgary nominees, that’s sorta the point. You’re supposed to discover new people, and new businesses. Winning my first one in 2010 literally changed my career, and I hope something just as awesome happens to this year’s winners.

Much as I bristle around most awards, they have a role to play in highlighting and celebrating the bright spots in our communities. A couple of things I would love to encourage, however:

As for me – well, for one thing, I’m going to stop citing “Third Hardest Working Calgarian” in my bio. Even at the time, I knew it wasn’t true, but I thought it was kind of cute, kind of funny. Over time, it’s soured. I work hard, sure, but not nearly as hard as most front-line workers, particularly folks working in health care, poverty or harm reduction, education, etc. I don’t work nearly as hard as the people experiencing poverty who are raising children, struggling with addiction or mental health or systemic oppression, folks who will never make it on a Best of Calgary list but who work hard every damn day.

And I’ll try to keep becoming a better advocate, and live up to that part of Swallow-a-Bicycle’s Art Manifesto that says:

We endanger the eardrums of the status quo by amplifying the voices of outcasts, misfits, diverse communities and artists who face barriers.

Thank you to everyone who nominated me as Calgary’s “Best Civic Activist”, but please don’t vote for me. And, in the comments below, I’d love to hear about the activists in Calgary that are doing incredible, impactful work, and that inspire or challenge you!